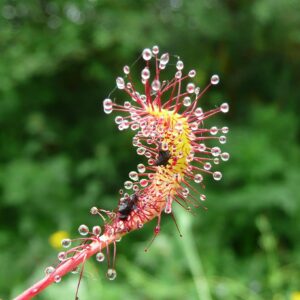 Sarracenia purpurea ssp purpurea often called the Huntsmans Cap is the northern sub-species. It produces slim ground hugging traps that fill with rain water to drown prey consisting of flies and crawling insects such as woodlice, beetles and millipedes. We have often found slugs and snails drowned in the traps.
Found growing as far north as Canada, S. purpurea purpurea is extremely hardy and has been naturalised in Southern Ireland , Switzerland and the Lake District.
Grows best outdoors or in a cold greenhouse and will do well even with lower light levels and an exposed position – a must for the outdoor bog garden as it keeps its traps over the winter. The deep red flower in early spring is held high above the plant.

Our plants grow without heating